What web can do: a mobile speech-to-speech translator

What web can do: a mobile speech-to-speech translator

Way back when, with the advances of computational linguistics in the 70s and 80s, some people thought that machine translation would be a solvable problem within years. That you could even travel the world with a portable computer, only the size of a backpack, that would simultaneously translate any spoken utterance to any other language. Over the years, there were a lot of research projects like PaPeRo, ATR-MATRIX, or Verbmobil to achieve this goal. Nowadays, with the Google Translate App on Android and iOS, you can easily do this with any mobile device – as long as you have an Internet connection. 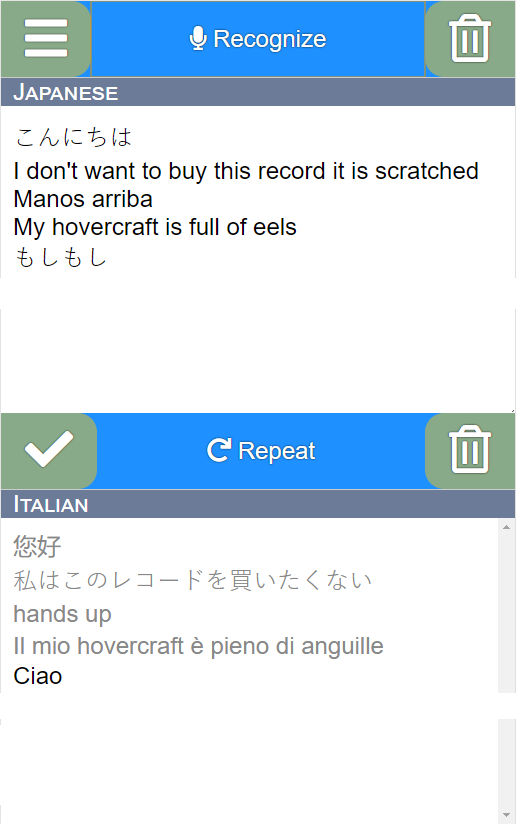 But is this also possible with a pure web page using only HTML, CSS, and Javascript? We’d need speech recognition, machine translation and speech synthesis as Javascript APIs or web services,

Machine translation can be achieved by using the Google Translate API. This is a cloud service you can use after registration which is (effectively) free for the first 500.000 characters.

Speech synthesis is available with more browsers, though your mileage may vary. Chrome-based browsers also offer the most available voices, though the mobile version is restricted. Desktop browsers like Firefox and Microsoft Edge only support languages that are locally installed. MacOS Safari seems to work, but obviously has severe problems with pronouncing non-latin characters.

The following table contains an overview of the state of the Web Speech API implementation for some browsers:

You can test all of this by clicking on this button which opens the application in a new tab. On a mobile device, you can also install it as a Progressive Web App to the home screen.

But as this is a software developer’s blog, we are obviously not finished yet.

For security reasons, speech recognition can only be started in an event handler triggered by a user gesture (like click or touch). The recognition process then fires a sequence of events, where the most important are onresult , onerror , onnomatch , onstart , and onend . We gather the recognition result by implementing an onresult handler:

There seems to be a bug in the mobile implementation where the flag isFinal is always set to true. In our demo application, there is a workaround for that: the recognition result is considered final when there is no new changed result for a certain period of time.

There is no Web standard for translating languages, yet there are quite a number of cloud-based services to do the job. e.g. DeepL, Google Translate, Yandex, IBM Watson, and Microsoft Translator, just to name a few. In this demo application, Google Translate is used for convenience, offering a generous free quota per month. The service can be accessed with a simple HTML request, obtaining the result as a JSON formatted data packet.

To use Google Translate, you have to register for an API key. This demo uses a simple proxy to hide the API key used while also caching the requests to reduce the load. Even though the free tier offered by Google Translate is generous, it is not unlimited. So all requests are limited to a number of hundred requests per day and IP address. If this is not enough, you can register and obtain your own API key and enter it in the configuration menu of the demo application.

For speech synthesis, we obtain a reference to the speechSynthesis object and call the getVoices() function. Using Chrome, the list of available voices is populated asynchronously using the onvoiceschanged event, whereas, in Firefox and other browsers, we can just call this function directly.

To trigger speech output, we create an instance of the SpeechSynthesisUtterance object, set all necessary parameters, including the language of one of the possible voices obtained and call the speak() function of the speechSynthesis object: